The AMD Graphics Drivers have this black lines bug. I'm using rx 6600 xt (yeah overkill but is what i have xD).

yo..can u port this to linux.. i miss playing this. im not a big wine user. if u need help i can give it in the process

This game seems broken for me, getting a runtime error on loading when trying to launch via itch client. Contacting itch about this too.

Reply
JordanHatesLife0977 days ago
I remember watching this game when I was really young, and it’s still terrifying.

Here is a story explained video I made on it!

I show this was updated 64 days ago. What was patched? Just wondering.

How in the hell do i open my inventory? I've pressed like every key and nothing

Reply
JT106 days ago
God I love this game, replaying it for Halloween and loved every second, super scary! :)
Reply
Dre0218107 days ago

Every time I start up the game in Windows 11 it has all this Static junk going on how do I fix that?

My character keeps spinning in circles how do i fix

Unplug your controllers and use the keyboard

how can I actually play nothing works I have a ps4 and a computer it won’t work on ether !?

Can you message support@itch.io for a refund?

The game works in Windows 10 for most people, I've verified it myself. but a few people have not been able to get it running on their specific set up no matter what. In that case, I recommend refunding

Hey Puppet combo can you please consider making it Linux compatible it would be very well appreciated if you can.

Hi, only Windows is possible.

Well, that was shut down pretty quickly. lol Have you tried it on Steam?

and now with Proton compatibility layer, there's even less reason to do so.

It's impossible to make this game compatible with Mac and Linux but it could be played through an emulator potentially.

I just wanted to say I love you guysZ work! Your games are awesome and I can see the passion in your work! Please keep the amazing games coming! Y'all Rock!!

Thanks for getting back to me that is very much appreciated and no worries that you cant i'll maybe try do some emulation or something but thanks again.

People have probably requested already, but I would looooove to have this compatible with Mac

Yep. So would I, and it would be easy to have done if it had been planned from the start, but no: so many people only support Windows. It's irritating when there are so many cross-platform options.

Trojan And Coin miner detectet on Virus Total, WHY????????

Because the antivirus is lying

Hello, I'm a game blogger from China. Your game is very popular with fans in China. Can I give you some game suggestions??

WTF is wrong with China?

Yeah Kersparsky deletes the main file too !! What's in the main file Dev ?  Gutted as it  looks an amazing game ! But after having my pc hacked a few months back I'm always careful of any waring by AV etc..

love the idea of it, had some issues running it and ultimately finishing it but overall made me interested in the other puppet combo games and decided to buy the entire pack.

@PuppetCombo - I was hoping to reach out to you, but I can't seem to find an e-mail/contact info. Seems this is a decent place to start. I'm a filmmaker/writer and a horror fanatic. I own all your games and was hoping I could get an e-mail address so I can write you a proposition and maybe spark a creative conversation! : ) Love your stuff! Keep up the awesome work.

After trying everything, the game still not work in windows 10, How could I request a money back?

dude this is the only game that wont open up. it shows a load screen and then nothing....

Is there a way to increase the brightness? I can't see a thing.

Legitimate issue. The game is unplayable after the lights go out.

There's a flashlight you can use.

Excuse me, how can I play this game (Stay out of the House)?

Its on the puppet combo patreon.

Whoaw!!! Great! I have some question in story(ies): 1. That closet built in corridor between Billy's bedroom and parents bedroom, - ask: It does avoid to across the outside corridor, doesn't it? So that bedroom is the house issue, maybe, just maybe, mr and mrs Johnson hidden some true about his family, Neokolaus Burr was elder son? The mirrors outplace indicate to me (a)- If Neokolaus really was their son, so they needed took off any sharp glasses (a blade shape) or because his rage after watch himself; 2. Billy is same Billy from Feed Me Billy? So after his child trauma in Babysitter Bloodbath might take his sanity at adult age, perhaps. Well, another great game. Here it goes my second part

Excellent as ever and other games yours. I love your slash-movie-tales-games, dude! Congratulations, Benedetto Cocuzza. Link about BBB(Babysitter Blood Bath). And happy new year, a bunch successful. Greeatings from Brazil:

Ah, this one is running properly in Linux thru winehq.

The game doesnt start in windows 10, so.... I try all and it still not working 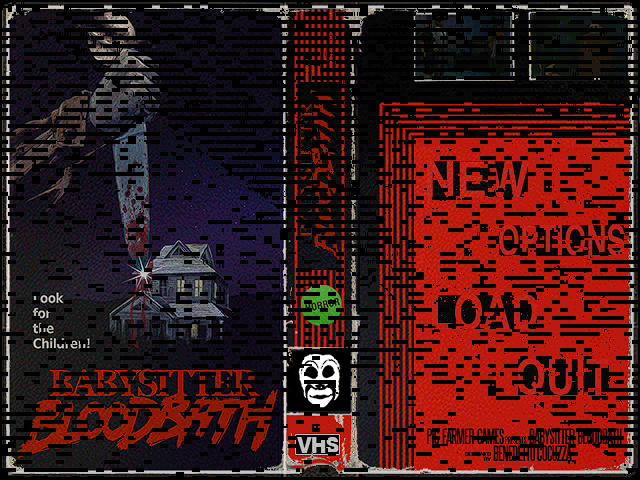 Maybe try updating your video drivers. It could be an issue with your graphics card.

Hello, same problem here, on W11 too, recent hardware. I have try many thing like run as W10, XP... Nothing work. Let me know if you find a solution.

Puppet Combo games just do not disappoint, and Babysitter Bloodbath is the perfect game to play during the Halloween season. I only wish I had the chance to play it when it was originally Halloween and had Michael Myers as the killer.

When i go to the page where i try to download the babysitter bloodbath game on itch.io and when i click on it it asks me to open it up on a different rar file in my files but the actual game is not in my files

hey guys great horror game I did have an issue with the controls in first person the "a" and "d" keys only allowed me to look left and right rather than move left and right. I was wondering was this a game play decision or a bug. other than that it's a solid 4/5 and i made a video if you dont mind checking it out. much love, peace.

It's called "tank controls" and it's used in many games

I bought this game and am struggling to open it and play it. Any advice

Is it normal that the download is a winzip? All the other games are downloaded as winrar docs...

The game wont start or show up at all.