Can you contact me at the support email? You should be able to find it with the game at https://itch.io/my-collections

Can u email me Diamondmlg900@Gmail.com

After some issues getting it to launch and mapping the controls using XPadder, I was really enjoying it. The alternate camera options are fantastic and each do a great job of keeping the tension. There are a few angles in the "movie" option that end up just being frustrating, though- like in the liquor cabinet room- but they're generally great. I did run into a really big problem, though. Right after going into the backyard, the game crashed and locked up my computer. I couldn't close the game and had to forcibly restart my computer. I also can't seem to save the game and then be able to reload the save. It doesn't show as existing despite the act of saving getting confirmed. I really want to play more of this game, though- it has great promise so far.

Thanks for the comments. I haven't receive any other reports of the game crashing in the backyard like that, so it could be a fluke. I think most issues with the game are due to antivirus interference. Adding it to your antivirus exceptions should have. Did you press enter after typing a file name while saving?

If I remember right, I clicked a confirmation button- been a bit since I tried, sorry. I'll give it another shot today- no hurricane to interrupt this time lol

I can't seem to gt the game to run in full screen despite selecting that option. Is it something with my computer or is the game bugging out?

Hi there, are you planning on any more physical copy runs for your games?

There will be a new one coming soon.

How do you save the game?

Use the vhs tape on the vcr

Where can I find more VHS tapes? Or can you only save your progress once?

Just absolutely terrifying. I'll probably never beat the game due too not being brave enough to repeatedly face the reveal haha.

What was Jill’s number again? Do I have to restart the game to get it? Edit: Checked a YouTube playthrough, it’s 555-8345.

How do you get this game running on Windows 10?

Edit: And DirectPlay is not the problem, trying to launch the game from its folder turns direct play on if its turned off.

I can't save my Game. I try to fix 3hr later... I need to know what the file type is for the saves?

Hi. Really a nice throwback game, I quite enjoyed it. But I would have enjoyed it even more if it had controller support. I mean you are basically emulating PSX games like Silent Hill or Resident Evil, right? Tank controls are better with a gamepad imho...

Thank you. It does  actually have controller support. Have you tried mapping a controller?

Sadly it doesn't recognize it when i try to map the gamepad buttons. I'm using a DualShock 3 Controller, but with a driver that is emulating a XBox Controller so it should regognize it as such....

Hi, *Not Spam BTW* but I'd suggest you use a program called Xpadder to map your controller. It's like 10$ and it'll take a little time to get used to it but it's worth it. You can map any USB input device to any game. I've used it to map thrusters and throttles to Kerbal Space Program and Lunar Flight and my friend has used it to map World of Warcraft to an Xbox controller. Although I wouldn't recommend the latter lol. I'm just saying it's possible.

Reply
The Gamer Cat1 year ago

Its upstairs in the kid's bedroom in the corner with the commode.

Hey, Puppet Combo. I'm not sure whether if this right or not, but it appears that Webroot, my anti-virus says this game, particularly "bloodbath.exe" is malware. Is this a mistake due to how the game is coded or something?

Yeah, it's a false positive. Since it's basically a Windows 98 game, some modern computers freak out and wonder why the hell you're trying to run it and assume it's a virus.

Ahh, I see. Thanks for the response. That's basically what I thought it was.

Like the Halloween movies but Myers jumpscares you by appearing from seemingly nowhere more than ever.

Is there another recommended guide to getting this to display correctly on wide monitors? The Steam link doesn't actually take me to a thread. :(

I guess that thread was deleted. It's pretty simple though, you would have to manually set your resolution in Windows before you play. 1024x786 or 800x600 would work. You could also play in Windowed mode for the correct resolution.

Dang maybe I will have to play in windowed mode, because even after I change my resolution, things stretch out when playing fullscreen. I wanted to be fullscreen so I could record while playing and have it look correct in the video, but I don't know if that's possible?

Has anyone had any luck with this one and wine/linux? I installed directplay via winetricks, but acknex.exe crashes.

I have tried everything in the readme, everything I've read on here and the troubleshooting page to get this game to launch in Windows 10 and it just won't launch. I was really looking forward to playing it.

Same here :(. When I try to open bloodbath.exe, it says I don't have the appropriate permissions. But when I look at the file properties, it says I'm the owner. I also can't add bloodbathexe to Data Execution Prevention exceptions as it gives a permission error.

I'm not sure what the problem is. I've verified the game does launch in Windows 10 with DirectPlay on the average computer (I've tested the game on several of my friends laptops and have gotten it to launch on all of them) so there may be some sort of configuration or even antivirus issue on certain systems that I haven't personally come across.

I tried to disable the antivirus completely, but in Windows 10 that can be tricky and kind of difficult to do completely, but I still can't get it. I appreciate you trying to pinpoint what's going on. I may be able to try it on a different computer soon.

no matter what i try i cannot get this game to launch, i click it and doesnt do anything, ive even extracted it with 7zip

i dont even get those options :(, i cant even start it in the browse

YESSSSSSS I FIGURED IT OUTTTT <3

For others who have the same problem, could you explain your solution?

What did you do to fix it?

I can't install the game: runtime error: index out of range :(

The itchio app has a bug with doesn't let you install the game. To play you'll need to download the RAR file from your library: https://itch.io/my-collections . There's nothing I can actually do about this, since the app is the problem. Somebody at itchio would need to fix it. I've sent support emails but I've never received a response. 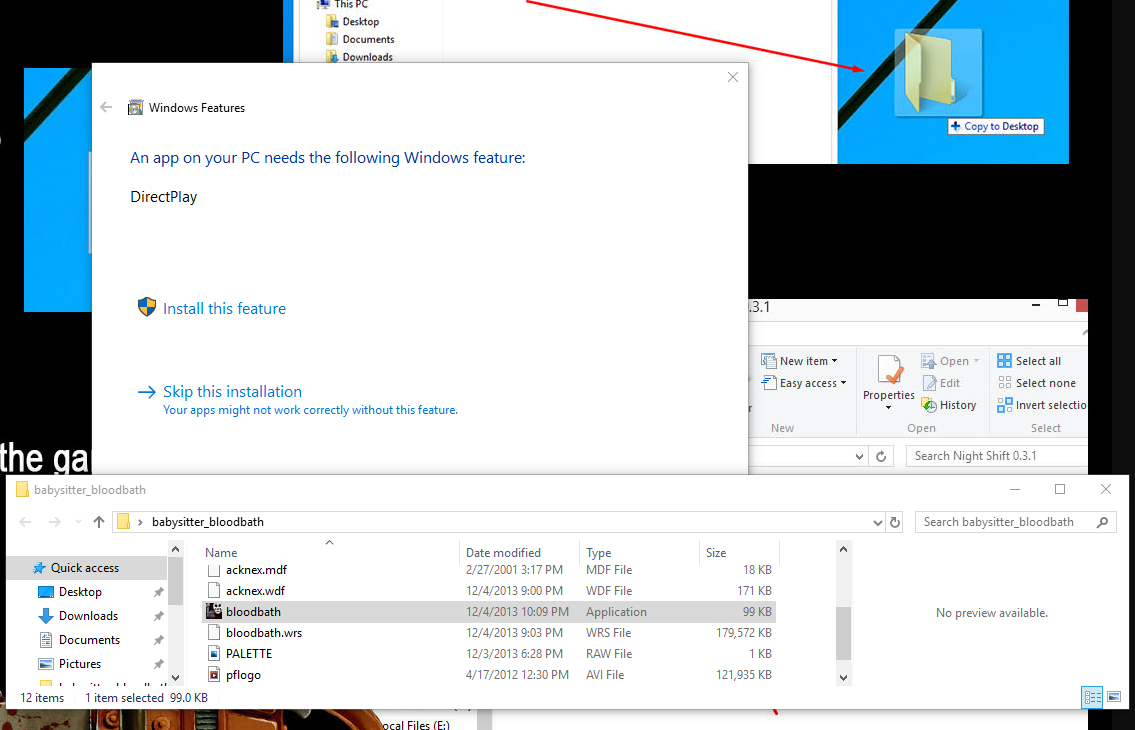 That's really sad I was looking foreword to playing this game

On Windows 10 the game may need DirectPlay to function. Try this: https://www.youtube.com/watch?v=6XYyGB-Tn3g

Recenly bought the bundle and I didn't know that it has this incredible game in it. :D

My babysitter spins counter-clockwise in place during the opening dialogue and then runs in circles as soon as I have control. This is with all default settings. Even if I change the button mappings it keeps happening. Is there something I can do to get it working?

Do you have a gamepad or joystick plugged into your computer? If so, unplugging or disconnecting that may fix it.

No joypad plugged in. Just the keyboard

I'm not sure what's wrong then. I'm guessing there's an input device somewhere that the game is detecting, even if it's not plugged in.

Sure enough, went digging and found the ghost device. Thank you for the help!!
Games awesome, the 3 camera angles used at -that part- tied in so well with the forced camera angles of the psx era. Really sharp work

Glad you fixed it!

I've tried installing the game through the Itch.io app but at always fails before the download finishes. It shows a message that says "runtime error: index out of range." Do you have any idea how to fix this?

The itchio app has a bug with doesn't let you install the game. To play you'll need to download the RAR file directly from this page. There's nothing I can actually do about this, since the app is the problem. Somebody at itchio would need to fix it. I've sent support emails but I've never received a response.

"To play you'll need to download the RAR file directly from this page."

What about if you got it from a bundle? Are you unable to download the Rar directly from this page if that's the case?

It should be in your library and able to be downloaded: https://itch.io/my-collections

An amazing experience to play!

I cant open the game on my windows 10 and my windows 7 laggs to much to play. What do i do?

Excues me sir, I tried to send an email and it says that the email does not exist... What do I do?

Hi, is this game working on Windows 10? the old halloween version closes after the Jack-o'-lantern scene

These games made me sign up for Patreon and become a Patron. There are many copycats out there, but there's nothing close to the allure of Puppet Combo games.

Okay Thanks for telling me.

i love making videos on pupprt combo games so far ive only done Feed Me Billy and Night Shift im definetly plannig on playing and recording this game:)

i just came here to say. im a patreon now. these games are amazing. keep it up puppet combo <:3

I have just bought the game with a lot of enthusiasm but when i click on new game the game closes. I have already sent an email asking for something else to the email ben[at]puppetcombo.com but nobody answer back so i am writing here for someone to answer me.

It would be wonderful if I could get any solution to this issue. Also please, answer back the email that i have sent to you Puppet Combo

Hi, I have answered all the emails I've received. Can you check your junk mail? My reply should be there. If not, please forward it again. Thanks.

okay i will send you the email again.

About the game babysitter bloodbath, I have a Windows 10 and the game does not work

Is there any solution?

I have searched the answer of the email in all the options of gmail but I did not find it. I think that I can not received your emails. I would like to ask you two questions and I think that the only option is with theese comments in itch.io. If you think that it exists another better option, please say it to me if not I would ask you my questions in this comment.

Hi, I did not receive an email from you. You can email, or message me on twitter or instagram. I can not give tech support in a comment section, sorry.

how do you save?

You can save at the VCR